I FINALLY released the EP I have been working on for the last year!

You can get it from Bandcamp. Come on, it's just $4 and it comes with totally lossless tracks plus a bonus sampler track and the full resolution cover that I drew (and coloured) myself!

I had been working on this EP for over a year now and it was starting to feel a bit annoying and sort of limiting, as every time I felt like starting a new track I would remind myself that I had this other project already started… and I wound up not doing anything at all.

So for this Easter I thought I would just focus on finishing the EP. It was now or never! If I didn’t finish it, I would archive it and move on.

On Friday I gave the finishing touches to three of the six songs which were pretty much done already. A fourth one I had to complete as it was missing a lot of parts and transitions. I posted a few clips in between songs to build some excitement!

And to be honest, I was actually getting excited that I was going somewhere with this work!

Jeff (alias canuckistani) liked my dubstepping vine and he turned/remixed it into a full blown track titled... SoleStep!

On Saturday I completed the two remaining songs and re-listened to everything again and made sure that the loudness was similar across tracks. I had to re-export a few of them after adjusting their compression levels as they were way quieter than the others, and it's better if all of them sound approximately equally loud!

Lost my own Loudness war to myself. Long live compressors! (wave on the right is the original) pic.twitter.com/warLA3bjPf

It was sort of funny because back in the days we always joked that the songs from our biggest rival tracker group sounded way louder than ours and that's why they were more spectacular. Ah, the irony!

Once that was done, I worked on the cover. I had a few ideas of what I wanted to make but I ended up going some other way. I drew the figure using a nib and ink, then let it dry and erased the pencil lines. I actually was in a hurry so I used a hand-drier to accelerate the process, and that's an actual lifehack for you all. 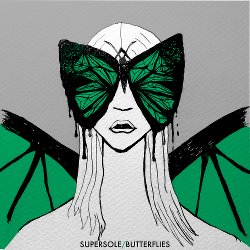 Then I digitalised it and added some sort of duotone flat colour using the GIMP and the trackpad. I just want to insist that I made all the selection drawing using the trackpad and that was AN EPIC FEAT. I wasn't planning on adding the colours at all, but somehow I got the inspiration by playing with random gradients. I thought they were tacky and so 90s, so what about some flat colours instead? And that's how we ended with the cover in its final state.

With that it was time to PUBLISH! Finally! I was *so glad* this was over because I had upgraded to Reason 8 half-way during the EP making process, and it introduced some changes in the mixing gear area and it made things very weird for songs that I had started before using Reason 8. There was this constant factor of not knowing which bus were the tracks going to, and also I wasn’t acquainted yet to the new way sequences and clips worked so it was… challenging. Oh and don’t even get me started with how many times I loaded a preset on the wrong instrument or created another instrument instead. That new file browser is… weird.

On Sunday I made a TL;DL (Too Long, Didn't Listen) version of the EP for very busy people. I put it on SoundCloud as I have seen a bunch of people putting their samplers there.

I also learnt that Audacity has a non-destructive envelope tool which came in really handy for fading in/out the song clips.