When I went to use my MIDI keyboard today I found that lots of keys weren't responsive anymore. Well, actually, it's not that they weren't responsive --it was more that they didn't do anything at all when pressed. Which is quite a sad outcome for their purpose in life.

It seems this particular brand and model has this defect; there are several posts and threads mentioning it, and some of them even suggest that the manufacturer would replace some piece or cover the cost of repairs, if under warranty. But unfortunately I just found out about it when the warranty had expired (as it always happens). Not that I would have been able to find a receipt, since it was a gift, and I seriously doubt trace is still storing the receipt almost five years later. And the shop where the keyboard was acquired doesn't even exist anymore (it was the defunct Virgin Megastore at Oxford Street, if I'm right; either that, or the also defunct turnkey at Charing Cross Road).

I had attempted to fix this problem a few months ago. The first suggestion I tried was the easier and also the least effective: just press the non-responsive key several times, frantically, until it begins to respond. It somehow worked, but a few minutes after it stopped working again. I then went for the second suggestion, which implied opening the case and cleaning the internals, just in case there was dust or something blocking the contacts. 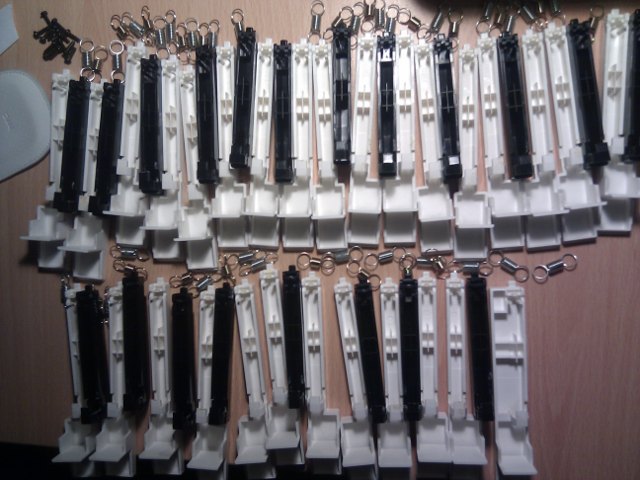 I spent quite a lot of time dissasembling the keyboard itself. It's very time consuming: you have to loose each spring individually before you can take a key out. Also, you need to do things in a certain order: each black key can only be removed once the surrounding white keys have been removed. Once the bloody 49 keys with their springs had been taken out (by means of an ingenious use of a screw driver to lever/yank the spring out), I could see there was a lot of dust and dirt inside (although I have seen much worse, I must say). So I vacuum-cleaned everything carefully, and then used q tips to clean the small delicate places one by one.

As a cleaning routine it was very hygienic, but it was totally useless for my purpose (i.e. playing music). When I reassembled everything I found that the keys were still not working. I thought that I had had enough, and decided that I would do with whatever working keys I got. In a bad case I could always use the octave up and down keys --the lower octave worked perfectly! 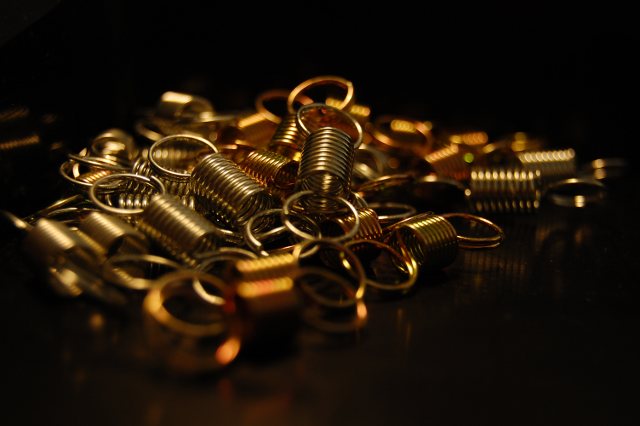 My error was not removing the rubber bands and cleaning below them. I thought that if the rubber bands were so closely together with the underneath circuit board, there could not be any trace of dust below. And I was right on that --there wasn't dust. But as I have found today after disassembling the 49 keys with its 14 screws, it's not dust we want to remove from the contacts, but the remains of the rubber contacts.

I know it sounds confusing, and it won't help that I haven't taken a picture when I removed the bands, but I'll try to explain: underneath those rubber bands there's a couple of golden contacts per key. Those contacts are right below the circles which the key presses when you press the key. Each of those circles has a black round piece which deals with closing the circuit when the key is pressed.

Then the problem is that due to using the keyboard the pieces end up leaving their mark on the golden contacts. It seems that once their mark is in there (a round, ghostly impression of the black pieces), no matter how strong a key is pressed --it won't be reported as a key press. And the solution is very simple.

Yes. A simple pencil eraser. When I read that I couldn't believe it. Cleaning the contacts with a rubber eraser? What's next, drawing circuits with indian ink? But hey, why not? It couldn't be worse; this time there were even more failing keys than the first time I tried to fix it, so it was either attempting this or starting a search for spares.

I first erased the contacts for B-2, which had stopped working six months ago, and was really bugging me: it being in the middle of the keyboard, it's probably one of the closest keys I press to test sounds and patches!

I then reconnected its rubber band (which is quite a tedious process in itself), and tested the keyboard. It worked!! I was ecstatic. Would it work for the rest of keys? I did the same for the rest, even if not all had failed, but just in case. Then tested them again, pressing with a ballpen over the rubber contacts (to avoid getting accidentally electrocuted by pressing some of the metal surfaces and connections you can see in the picture). All the keys worked now, even the highest C! But... would it work with the keys on?

49 keys and their corresponding springs, and 14 screws later, I can proudly say that YES they work!! I have now a functional keyboard again \o/