With morphings, character animations, 3d parts and even greetings!!

There’s no preference setting for this in the main program, but schism stores these settings in a little file which you can find in ~/.schism/config if you’re using linux. There you can change all sorts of stuff without having to write a long command line with lots of parameters each time you run the tracker. But what concerns us is the [Audio] section:

I changed mine to 4096 as you can see, and the horrible cracked sound that I was getting just disappeared. It might feel a little laggy now but I’m not using schism for jamming or anything, so it’s fine for the time being.

Somebody else suggested using a switch like “-a hw:0” when launching schism, so that it would select the first hardware device, but it either doesn’t work like that or pulseaudio is monopolising every device.

Working suggestions are welcome, although not urgently needed ;-)

And here’s another person enjoying what she does! I’m not sure what impresses me more: the playing technique or the hair-do. But considering the video is from 1976, let’s just pay attention to the music. I can’t distinguish it very well but I would say she’s wearing some kind of metal nails on her right hand to pick the strings. Either that or she just has developed ultrahard nails:

This is just so hilarious! I have always found Macca super funny and I love how he shows he’s enjoying what he does. Super!

It’s funny to hear first the familiar “Disco” pattern and then the altered version. I specially liked when he shows how he managed to make only the bass drum sound. The 90’s-like rave distortion sound is very funny too. I imagined for a few seconds someone like the Techno Viking dancing to a loud circuit bent casio pt-100 and it just seemed so funny!

He has removed the internal speaker to make way for the extra knobs. I’m not sure about the internals of the instrument, but aesthetically it would have looked nicer to place the extra controls on the free area, just above the lower octaves keys. Again, what I’m saying maybe doesn’t make much sense since it’s possible there’s no room for extra stuff at that place.

The other nice addition is the audio jack. The original keyboard can only output audio via the internal speaker and that is slightly annoying when your family wants to sleep but you just had a musical idea and want to try it :)

For your reference, this is how an unmodified casio looks like (it is mine, actually) 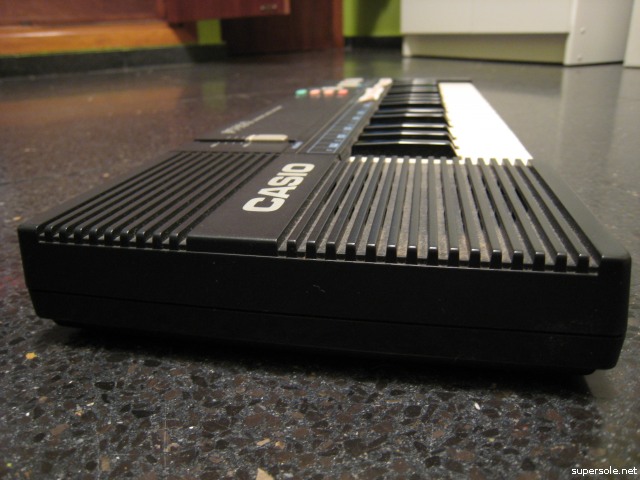 I think I wouldn’t dare making all those modifications to my first ever keyboard. Maybe if I get my hands on another one, from ebay or something like that, I would try. As long as it doesn’t bear any sentimental connection it should be fine, I guess :D