After the mind-exhausting week I’ve had, I had to find a way of allowing my mind to relax – and for that, there’s nothing better than cooking!

On Friday, I went to the Japan Centre for the first time. As it’s near Piccadilly, I went there having a walk through Green Park, while listening to some of the sharity music records I had found recently (I’m just so addicted to Connie Boerman’s Trip to venus).

I hadn’t formed an idea of how the center would look like; I guess I was expecting something like Chinatown’s groceries stores but it wasn’t like that at all. It was an extremely neat and clean although very busy store, featuring a neverending parade of posh and alternative Japanese girls and boys, along with Japanese executive guys, sometimes with their little children, which tried to pass underneath your shop basket sometimes, and a handful of European, quite lost people (like me), trying to find their way in the myriad of Japanese products stacking in the very stuffed shelves.

Oh those colours! Those bold kanji2 in the packaging! My visual senses, so used to the austerity of European uses, simply get overflown with the Japanese packaging style1 and I just can’t focus anymore. When I managed to kick myself into action again, I began looking for what I needed (otherwise I would have spent there the whole evening and maybe too much money).

I managed to find those mysterious toppings that are sometimes sprinkled onto vinegared rice and whose name I still don’t know, and more importantly, I found dashi, which was probably one of the missing ingredients for my sushi rice3. I also found those seaweed based snacks that are so cool, seaweed sheets, soy souce and sushi rice. They were quite cheap and there’s a big assortment (although that may be a little inconvenient if you’re undecided or don’t really know what you want, but just go ahead, pick one and test it out!).

But sushi was for Saturday. Once I got back home I let my Japanese shopping there and went for my Mediterranean in UK shopping. When I was in Spain past Christmas, I found the recipes my grandma told me, so I decided I would try them as soon as possible. In fact, I had already done what I wanted to do past year (Cocotets), but I did it wrongly, as I found when reading the original recipe.

So I got some sweet potatoes and went home ready to revive the recipe. As usual in the Mediterranean gastronomy, it is basically a mix of almond flour, egg and sweet potatoes, topped with nuts. The recipe suggested way more sugar than I wanted to add, so I just strategically cut that amount to 25% of the original, and used cane sugar too as I like it more than the refined one. For some reason the recipe stated I should make balls of the mix and put them over pieces of baking sheets but once I finished putting them in the oven tray that way, I remembered that my grandma used to place those balls in muffin cases, so I’ll probably try that instead next time.

The result might not be gorgeous visually speaking if you’re used to the industrial perfect looking sweets that everybody eat nowadays but they are supremely tasteful and addictive. The best of all as I always say, is they don’t make my teeth grind as industrial sweets do.

What I do not know is why did she call these sweets Cocotets, which means little balls of coconut in Catalonian. And as you may already have noticed, they do not have any coconut at all. Who knows!

I had already attempted to make sushi past year and while it was a decent attempt, I wasn’t fully satisfied with the result, and the more I ate real sushi at Japanese canteens the least satisfied I was. The rice tended to not to be pleasant, and I’m quite picky when eating rice (too cooked or not enough cooked and I’m unable to eat it), so I decided I wasn’t going to make any more sushi attempts until I found a better sushi rice recipe.

Then I found about the new recipe for making sticky rice and I had been exercising it with several types of rice (basmati and normal short grain rice); once I was fully convinced that it worked, I decided to go for the full pack: sticky rice with the rice vinegar, dashi and sugar mix and of course, making sushi rolls!

This time the rice was undoubtedly better, sticky but not overcooked and delicious and subtlely vinegared. The only problem I find is that the seaweed sheets are just too big and I prefer smaller rolls, so I think I’ll cut them in two pieces next time and do smaller rolls which do not need so much rice and are easy to arrange and cut I think.

Since the sheets were so big it got short on the rice side, and I had too much ingredients for little rice, so I decided to be creative and wrapped some vegetables with salmon with one of those belt-like seaweed stripes which so funny look to me. Maybe they have a name but I do not know it!

And what I’m more proud of is that I managed to make California rolls!! YEAAAAAH! These are the ones with sesame seeds and rice outside, and need to be done by putting the rice first on the sheet, then flipping it upside down and adding the filling on the other side of the sheet, and then roll. For some reason I’m obsessively fascinated with the California rolls, so I was super happy when finding that with this rice recipe it was possible and easy to make them.

The only pity is that due to the rolls being so big and not having enough rice to completely fill them, they don’t look rounded and nice as one would expect. But they were terribly good and tasty.

I even had some crazy ideas such as making rolls with unusual ingredients like fuet tarradellas, chorizo or even fruits such as orange or apple cut into slices, but I guess I’ll apply them once I make perfectly rounded rolls ;-)

If you’re Japanese and are reading this please do not feel offended by all the possible offenses I may already have committed against sushi (specially making sushi with unusual ingredients). I myself I’m trying to avoid feeling offended when I read about Spanish omelettes being cooked in ovens, paellas which include sausages, mussel, chicken, chorizo, and lots more ingredients at the bloody same time and things like that so I understand you perfectly, but apologies anyway :-)

1 And then they have muji – a country of opposites, oh yeah

2 I think they are kanji, correct me if I’m wrong

3 Just in case you wonder, I found about dashi in this how to make sushi rice recipe which is working wonders

For some odd reason1 the podcast wasn’t working properly with itunes, but thanks to Jason who spotted it and let me know, I fixed that. So all the itunes fans can rest assured they will be automatically notified when new weapons of mass torture are released. I mean, new songs ;-)

If the captain announces the weather in Valencia is glorious although pretty much windy, and that there are going to be quite a few, mostly unpredictable turbulences and everything is probably going to be a little bit shaky until the plane lands, one should not decide to eat her sandwich at that very moment, even if the idea of flying over Valencia’s port in a roller coaster fashion sounds very innovative. 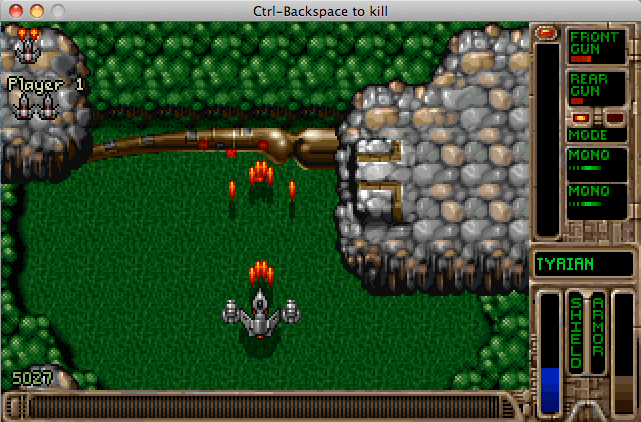 If you know what I’m talking about you’ll be überhappy when I tell you I just found about a project called opentyrian whose aim is to build a C port of the original Tyrian1.

There are more details in its wikipedia entry; the key aspect is that I tested a Mac port called CocoaTyrian and it works even with the music and everything, so I can use the adjective I was reserving for special occasions: AWESOME!

The mac port is done by someone called simx, he intends to have a dmg version always here (dmg) and you’ll need the data files which are here or here (the mirror).

I have extremely good memories of this game. I remember I got it from some shareware cd, and it being the shareware version, had only one level. It wasn’t until some years later that I got the full version somewhere (I can’t quite remember if it was an abandonware site, another magazine or even if I bought it in some computer sale or something) and could enjoy all the levels.

What also delighted me was the ability to improve and customize the spaceship: how to configure it so that we could fight the next enemy and kill as many enemies as we could so as to obtain more coins to customize our ship even more!

1 The game was originally developed with Pascal and didn’t run with modern versions of windows.

As the description reads, it is An auditive painting of a journey through South Iceland and back.

Generally slowly paced, as Iceland’s scenery, it also has its moments of sonic cruelty, disparities – and weirdness, too. I probably have indulged a little bit too much in some crescendo excesses but I had the feeling that I was going to make them anyway, so there was no point in trying to constrain myself to a given structure.

You can listen to the songs before downloading them with this nifty player from last.fm:

The EP is available in last.fm, just in case you want to tag it with something nice such as “great free music you ought to listen”, “Love it”, etc (hint! hint!).

People with exquisite listening skills will appreciate the immediate availability of a 320 kbps mp3 download, including the cover (last.fm downloads are only 128kbps).

Big thanks go to Mr.doob for creating such a nice and abstract cover in record time, and of course, to David Corral for inviting us to his Reykjavík flat.

If you haven’t been to Iceland, go there as soon as you can. Even if I tried very hard, these songs can’t make justice to the greatness of that mighty country, and even more, each person will find Iceland very different. It’s a great place. No wonder musicians such as Björk and Sígur Ros and lots more that I can’t remember right now came from there!

And if you listen to the EP… please leave your comments here too! Thanks!